Before we explore this topic, we must first understand the differences in “full power” rifle ammunition and “intermediate” ammunition. Full power ammunition can be used for a wider variety of purposes than the intermediate loads. But they both have drawbacks that will be later discussed.

Full power rifle ammunition usually consists of large heavy rounds. These bullets usually have an exceptionally long effective range and can be quite powerful. The .30-06 Springfield, the 7.62x51mm NATO, the .308 Winchester, the 7.62x54mmR are some of the most popular full power rifle rounds in the world. Their weights range from 147 grain up to 185 grain or larger. Intermediate cartridges are bullets that are slightly less powerful but still offer an impressive maximum effective range. One main drawback is that they sometimes don’t offer impressive penetration of common materials such as brick, concrete, thin steel, or other common construction materials. Popular intermediate rounds include the 5.56x45mm NATO, 7.62x39mm, 5.45x39mm and the 5.8x42mm. In the late 19th century and early 20th century, armies around the world used rifles that shot FULL POWER rounds like the .30-06 Springfield, or the 7.62x54mmR. These rifles were called BATTLE RIFLES. Examples of these Rifles include the Russian Mosin-Nagant which used the 7.62x54mmR cartridge, the American M1 Garand used by American forces during WWII which shot the .30-06 Springfield, the Belgian FN FAL (Arguably the most used and most mass produced Battle rifle in the past century) which shoots the 7.62×51 NATO and the American M14 which shoots the 7.62x51mm NATO round. These are extremely capable cartridges. In sportsman terms, you can use these bullet to hunt dangerous North American game and some medium sized African game. But these powerful rounds came with their drawbacks. One drawback was weight. These bullets were large. A soldier on a long patrol really couldn’t carry a great deal of ammunition. A second drawback was over penetration. At assault distances of less than 100 meters, these powerful rounds often over penetrated human targets. This resulted in potential collateral damage and being faced with an enemy that kept fighting because all of the bullets energy wasn’t expended inside of the body. A third drawback of battle rifles was mobility. These rifles were often quite heavy (weighing 10lbs+) and had long barrels in excess of 20 inches.

During World War II, The Germans sought to revolutionized the way wars were fought in every way possible. German Airborne paratroopers were issued a rifle that was lighter, had a shorter barrel, and had a selective fire switch that could alternate between fully automatic and semi automatic fire. It was called the “Sturmgewehr 44” or STG 44 (literally translates into “Storm Gun”. This gun was lighter, more mobile and had a shorter barrel than all of its foreign counterparts during the war. An assault or “Sturm” could be carried out a lot more efficiently with this gun. It utilized the 8x33mm Kurz round. The 8×33 mm Kurz was THE FIRST intermediate Cartridge (Nearly ballistically Identical to the 7.62×39). It was MORE powerful than any handgun round, but less powerful than the full size rifle rounds that were being used in Germany. Ask ANY gun nut or firearms historian “what was the ORIGINAL Assault rifle?” “What is the grand daddy of ALL Assault rifles?” and they will tell you its The STG 44 .After WWII, the Allies scramble over this concept and the idea of the Modern “assault rifle” along with less powerful Intermediate was conceived.

The Birth of the Modern Assault Rifle

Modern Armies realized that their soldiers could carry MORE ammunition if they employed weapons that utilized intermediate cartridges. The faster your soldiers can move, the more efficient your battled plans will be. The Germans showed the world this when they dominated the world’s leading armies by utilizing “Blitzkrieg”. After WWII, We started to see an evolution with the World’s Armies. The Russians switched from the Large bulky Mosin-Nagant to the AK 47. The Americans switched from the large overpowered M-1 Garand and M-14 to the M-16. The German Army switched from the large G3 to the G41 and later the G36. 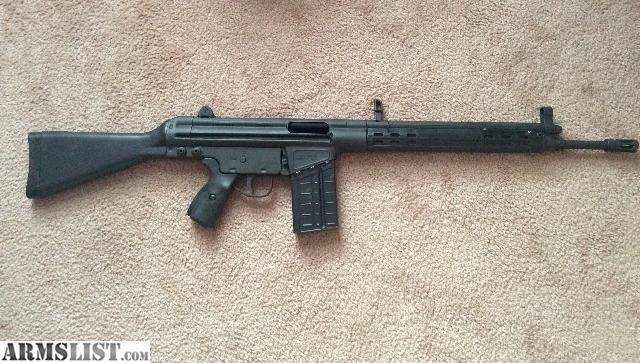 Modern Role of Battle Rifles and their powerful cartridges.

In spite of widespread evolution, Battles rifles AND their respective ammunition have managed to retain a critical role in modern combat (and sporting purposes).

Battle rifles have been modernized to accept upgrades that their WWII counterparts could only dream of. These technical upgrades include, polymer butt stocks, folding butt stocks, tactical rail mounts to fix scopes and other magnified optics, and modernizations in metallurgy. Advancements in metallurgy and polymer science allow for weapons to be a lot more durable but yet nearly twice as light as their antiquated grand parents. These Modernized versions of Battle Rifles are called “Enhanced Battle  Rifles” Or simply EBR. EBR’s have more of a “Tactical” look and have more external polymer components (extremely tough synthetic materials). They also tend to be more cosmetically customizable. These customizations may include different color schemes to mimic camouflage of different terrains and elaborate muzzle brakes.

EBRs are usually a vital component of a combat squad. The previously mentioned  “overpowered” “FULL POWER” rounds can engaged targets behind thicker cover, and have nearly twice the maximum effective range as assault rifles. Some combat squads have soldiers that carry EBR’s that can engage targets at farther distances than the squad’s riflemen, but slightly less distance than an actual sniper. These soldiers are called “Designated Marksmen”. The rifles are called “Designated Marksmen Rifles” or “DMR’s”. At the basic level, an EBR CAN be a DMR, and a DMR CAN be an EBR. It is important to note that the old antiquated battle rifles did not become extinct, they just evolved.

What other roles can these full powered rounds fulfill?

Other than being sniping and marksmen rounds, full powered rifle rounds are also useful in crew served weapons. Some examples of these weapons that fire these cartridges are the The Russian PKP Pecheneg, The American M240, The Russian PKM and the American Mark 48. These systems are called “Medium Machine Guns” or MMG’s (In contrast to Light Machine Guns that fire Intermediate rounds or Heavy Machine Guns that fire Extremely large Anti-Material Rounds) Their purpose is to provide medium range suppressive fire with excellent penetration against regular cover such as brick, stone, wood, sheet metal or any basic construction materials.

All gun photos courtesy of world.guns.ru

All ammo photos courtesy of http://www.google.com